Piano Works is Ullén’s most ambitious work so far – a triple CD of solo recordings capturing the breadth and depth of Ullén’s singular musical vision. Ranging from 49 seconds to almost fifteen minutes, the 27 pieces collected share the distinction of sounding thoroughly composed and yet instantaneously sculpted (as they are) at the same time. There is a precision to her playing which brings out every note, fixes it and makes it sit there on the musical canvas, even as the figures depicted defy description. Like an aural version of Beckett’s Godot, her music is constantly moving, breaking out in different directions while remaining determinedly fixed in one place. The best way to describe this music is perhaps to say that it is, literally, surprisingly melodic. Listen to ’Chair two’ for a quick example; or to the seven-part ’Hollow’ for a sustained illustration. This is anti-mood music, often astonishingly beautiful in its refusal to dramatize anything but its own unfolding. 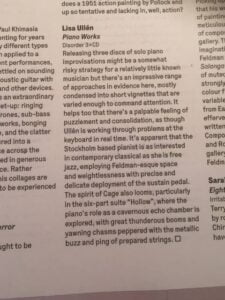